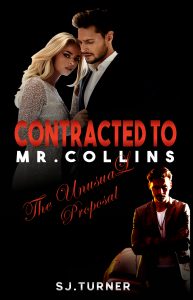 About Contracted To Mr. Collins – The Unusual Proposal:
Steam Level: 5

Hearing about an account executive position at Collins Enterprises with a $75,000 base salary, Rebecca D’Angelo is eager to apply. Putting together a stunning portfolio and an impressive résumé, she marches herself directly down to the office. When she reaches the building, a notice on the front door catches her eye.

DEADLINE – Résumés for the Account Executive position must be received no later than 10 am this morning.

Panicking, she darts toward the information desk. At first, Rebecca has no idea what she’s run into – a moving brick wall?

Crashing to the floor, her latte and portfolio launch into the air. Her first thought – thankfully, my documents are in a protective cover. Then a set of large hands wrap around her arms and a deep rumbling voice echoes above. “Jesus Christ! This is not a schoolyard, young lady!”

Rebecca slowly peers up, her eyes anchoring on the most gorgeous creature she has ever seen. His beautiful cobalt blue eyes shine like stars against a perfect bronze tan, emphasized by neatly combed black hair that flawlessly tapers to meet a designer beard. She can feel the power radiating off his 6’4” GQ cover body as he wipes her latte from his crisp white shirt and expensive Armani suit. There’s no mistaking who this man is — Aiden Collins, CEO of Collins Enterprises.

Surprisingly, she’s made it to the final round of interviews. Though, today’s interview will be conducted by the one and only — Aiden Collins himself. Yep. That’s right. That means her fate at Collins Enterprises now lies solely in his hands.

On the bright side, it’s been three weeks since the latte incident, and after all, she has made it this far. That must mean he’s forgotten. Right?

SJ. Turner fell in love with literature at an early age. She found herself stealing her mother’s romance novels and tucking them under her pillow to read late at night. Though the first novel that truly made an impact was To Kill a Mockingbird by Harper Lee—a story that has managed to stick with her throughout the years.

In 2018 a family member had suggested writing a book and within a few months, Contracted to Mr. Collins was written. Though it was written mainly to amuse family and friends, the unedited version was uploaded to a self-publishing site. Yes, unedited and open to the public. Yet amazingly it still made a splash.

To her surprise not only was it selling but there was a consistent request for a follow-up book. That could only mean one thing, there’d have to be a book 2.

With the readership on the rise, there was only one thing left to do—the Collins books had to be pulled and reworked for a real audience.

The first book of the Collins Brothers series has since been re-released by Cozy Reads Publishing under the new title Contracted To Mr. Collins – The Unusual Proposal and can now be found on several platforms including Amazon, Barnes & Noble, Kobo, Apple Books, Nook, Google Books & Smashwords. Book 2 is expected to be out by the end of July 2021, Contracted To Mr. Collins – Decisions.