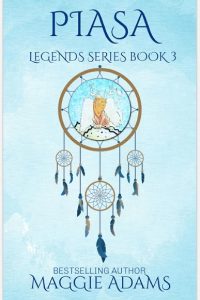 “What do you seek, child? I see your heart is troubled,” the shadowy figure asked.
“Father, I am conflicted within my heart. Our history with the monsters of blood, the day-walkers of old, tells us to beware, to call upon the ancients to protect us as we battle this evil.”
The figure nodded. “It is so, Child.”
“But with the utmost respect, Father, I have met one, and he is nothing as our ancestors have described. He is honest and true, trying to protect his tribe from the very evil we have battled against. I have seen it with my own eyes. How can I destroy what has saved my life?”
“He has tasted your blood?” The shadow recoiled at the thought.
“No! He fought an evil sorceress, his own mother, to save me and my friends. I would have died if they had not called upon the Piasa Bird to save me.”
“You speak of legends long dead, daughter. You were mistaken in your thoughts. The Piasa Bird is extinct.”
“No, Father, he lives. The last of his kind. Unique, just as I am unique.”
She pulled her shawl away from her shoulders, exposing the birthmark of the dragon. It glowed with an inner light of green. The figure stepped back.
“How long, Daughter?”
“Since the day the sorceress tried to take my soul and my powers. The dragon’s tears saved me, but now, my mark aches and glows.”
The figure was silent for several minutes. Delta worried she would never get an answer to her problem. Finally, he spoke, “There is only one reason for your mark to glow, Daughter. You are the key to banishing this evil from your world. You must turn these evils on to each other, so they will each destroy the other and leave your world forever.”
Delta was alarmed. “But, Father, I am a simple shaman who happens to interpret dreams. I cannot create such a fight. It is not within me.”
The shadowy figure closed the gap between them. “You have invoked the ancients to cleanse the evil once before. You must finish it. It is your destiny.” His hollowed orbs shone with an intense red light.
Delta sensed his eagerness, his elevated aura was almost yellow, and she cringed. This was not what she expected, she was but a pawn in this centuries-old fight. It would mean she would lose her friends, her business, maybe even her life, but it was written, so it must be so.
“Very well, Father. I will turn the day-walker against the dragon. My prayers and offerings will be centered on their demise.”

Delta Birdsong, shaman, needs a miracle to change her destiny. Jackson Thibedeaux, dragon shifter needs a miracle to save his species. When they team up to find a magical power, will it be the miracle they desire, or will they unleash the worst evil the world has ever known?

International bestselling author Maggie Adams lives in St. Louis, Missouri with her husband, four kids, and four of the sweetest, smartest, and most talented grandchildren ever to grace God’s green earth. She began writing at a young age, concentrating on creative writing of poetry, short stories, and comics. It wasn’t until she read her first historical romance novel at the age of fourteen that she found the romance genre gave wings to her writing soul. She finds humor in everyday life, as her books often reflect, and believes in happy ever afters, no matter what the circumstances.

Her first novel, Whistlin’ Dixie, debuted in the top 100 of several book lists and made the tiny town of Grafton, Illinois, a reader’s romantic escape. There are five more books available in the series: Leather and Lace, Something’s Gotta Give, Love, Marriage & Mayhem, Forged in Fire, and Cold as Ice. She also released a companion cookbook featuring the recipes from the series as well as tried and true comfort food from generations past entitled, The Coalson Cookbook of Memories.

In addition to the Tempered Steel series, she is the author of the spinoff paranormal romance series, Legends. The first novel, Legends: Catori, garnered her recognition in the USA Today’s Happily Ever After section of Lifestyles. Legends: Kermode, followed in 2019 and Legends: Piasa is coming in 2021 along with the final book, Legends: Amarok, is coming 2022.

In 2019, Maggie also began releasing her over-forty series, Hell on Heels. The first two books in the series, Minx and Jinxed are widely available. Look for Sphynx, the next book in the series, to be released in Fall of 2022.

She has collaborated on several charitable anthologies and has enriched older stories into stand-alone novels, including her women’s erotica bundle, Lustful Legacy.