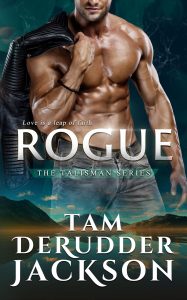 Baz Cormac never intended to be a rogue, but fate had other ideas.

Being forced to pledge loyalty to the evil Morrigan is its own kind of hell. So when Baz discovers the lie she’s used to keep him and his band of rogues under her power, he concocts a plan to force the goddess’s hand, which drops him in the center of a cosmic tug-o-war. No matter which way he leans, someone is going to lose-and it looks like that someone may be Baz.

A talisman fights her fate…and her fatal attraction.

Delaney Ferrell has spent her life trying to live down her uncle’s choice to turn rogue. As a warrior-talisman hybrid, she’s done her best to serve the warrior community as a protector. But a cryptic letter sends her to an abandoned home where she encounters a lone rogue with fighting skills no rogue should possess. Instead of killing her, he kidnaps her and takes her to his lair. He presents a terrible danger to the community, one she must neutralize.

So why does he have to be so damn charming?

Discovering Delaney is his fated mate throws all of Baz’s plans into chaos. And when the goddesses come calling, Baz has to choose between a rogue’s freedom and a talisman’s love.

Will they have a chance at love, or will they be torn apart?

Like the tagline of her first novel, Tam DeRudder Jackson’s personal motto is “love is worth the risk.” Readers and reviewers have praised her stories for her swoon-worthy characters, movie-quality world-building, and strong writing. Though she’s a voracious reader of all genres of romance, her favorite genres to write are paranormal and contemporary. When she’s not writing or reading, she’s probably traveling or skiing or dancing at a rock concert. You can connect with her on Instagram, Facebook, and on her website: