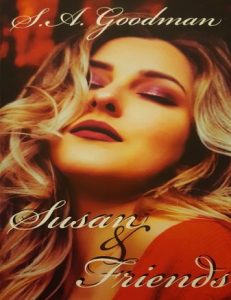 About Susan & Friends:
Steam Level: 18 and over

Susan & Friends is a group of jet-set hot blooded women that enjoy an enjoyable time. They take you on a thrill with the activities in their love lives and their sexual encounters.
The ladies are not only beautiful but also street smart businesswomen with significant investments in many companies.
Susan is a dangerous, sensual, and unforgettable beautiful woman, who sits on the board of many cooperation industries, and owns condos in Miami, Atlantic City, Chicago, and New York. The other lady’s investments in real estate and condominiums make their lifestyle envious.

Sherwin was born and raised in Barbados and began writing poetry as a teenager. He emigrated to Canada at a young age. In 2007 one of his poems won the Editor’s Choice award from Poetry.com, and in 2016 he and his brother Ceifred published a book of poetry titled “Structures Of In-elegance.”
Author, actor. Sherwin has since written and published four other books whose titles are “Rick Drago.” “David Trent.” “Caribbean Assassin.” and his latest. “Susan & Friends.”
Sherwin loves to play a game of Domino and has won many trophies in competitive Domino games.
He learned to play the guitar at a young age and took acting lessons in Montreal, appearing in many films, TV shows, and on stage.
He lives in Canada on the outskirts of Montreal in the city of Chateauguay.
A lover of music from the 70s and has a vast collection of Vinyl records from that era, which he enjoys listening to when he is writing.
Sherwin appeared in many singing talent shows as a young man in Barbados, performed on the hit series “Studio Party” hosted by Vic Brewster back by the band “The College Thrillers.” and then performing once more with the band Silhoulettes Combo.
A world traveler to places in Asia, Europe, South America, and travels to the Caribbean twice a year.