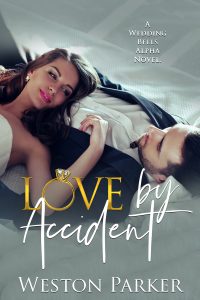 About Love By Accident:
Steam Level:

What happens in Vegas goes viral in Vegas. Wait…
Being the only child of America’s wealthiest man is painful at times.
But it only gets worse when your name changes in the middle of the night thanks to a drunken lovefest turned marriage.
It started with a fight with a pretty pink cocktail and ended with a not-so-pretty pink plastic ring on my finger.
And he was a perfect stranger. A very hot stranger, but that’s quite irrelevant now.
Oddly enough, an annulment isn’t in the cards for us.
You see, in order for my drunken mistake not to affect the lives of thousands of innocent children, I need to convince my husband to stay married to me for at least six months.
But it’s never that easy, is it?
The poor boy has to deal with my dad and my ex who are working together to marry me off.
And not to my husband. But he’s a keeper.
Now to convince him that our love by accident is turning into a happy ever after.
It is for me at least.

END_OF_DOCUMENT_TOKEN_TO_BE_REPLACED 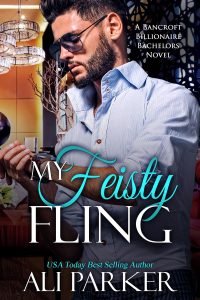 About My Feisty Fling:
Steam Level:

The last thing I need is a sexy distraction, yet here we are. Again.
My father has been kidnapped.
I’m the only one with the skills to bring him home, but my wicked hot ex shows up at the airport and is on my flight.
What are the odds?
She’s also a private detective working her own case.
But much to my surprise, she wants to work together.
Not a chance in hell.
She gives the good stuff, then takes it away.
No way this woman is destroying me again.
But she is my favorite sin.
Unfortunately, there’s no time for romance as we find ourselves in danger.
I have a life or death fight on my hands, but I never imagined the real battle would be for her.
My first love. My Feisty Fling.

END_OF_DOCUMENT_TOKEN_TO_BE_REPLACED 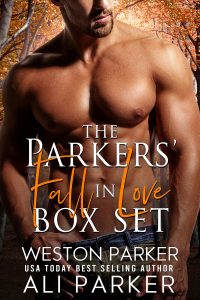 About The Parkers’ Fall in Love Boxed Set:
Steam Level:

Six Parker-Family Books for your reading pleasure.
Featuring…
Need You Now
Follow You Anywhere
Fall for Me Again
All About the Treats
Pick Me, Handsome
Rich Fake Witch

END_OF_DOCUMENT_TOKEN_TO_BE_REPLACED 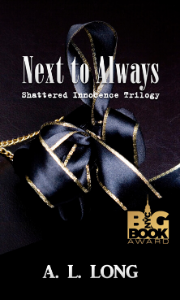 About Next to Always:
Steam Level: 5

Sexy and Sizzling HOT!!! It will leave you begging for more…

Rade and Dylan’s story continues in Book Two of The Shattered innocence Trilogy.

Rade Matheson thought he had everything he needed, Money, Power, and a woman who was willing to submit to him. That was until one night at The Castle changed everything. Losing the only woman who could bring him to his knees was never a possibility for him. Given a second chance, he’s more determined than ever to find the man responsible for taking the one thing he cared about. He ends up finding more than he bargained for. Turns out Michael Stewart wasn’t his only threat. Lust and obsession have a way of revealing themselves when hatred takes a front seat in a deadly game of revenge that Rade isn’t willing to lose. One by one Rade’s secrets begin to unfold, threatening the one chance he has to make Dylan his forever.

Dylan Adams ran away from the only man she could ever trust, but when tragedy strikes, Rade is there right beside her. Willing to give him another chance, Dylan confesses her love for him. Everything is perfect, she couldn’t ask for anything more, until her world falls apart. She knew he had secrets, but the one secret she didn’t expect, is the one secret that could tear them apart

END_OF_DOCUMENT_TOKEN_TO_BE_REPLACED 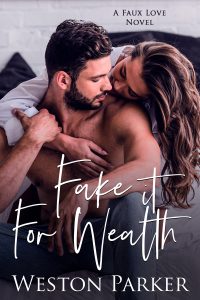 About Fake it For Wealth:
Steam Level:

I’ve been lying to my family for two years.
They think I’m married.
Plot twist. I’m not.
It’s unheard of for the oldest son in a wealthy family to be single. My mother makes sure I’m aware of this truth.
Hell, it’s a downright sin for him to be married by Elvis in Vegas.
But I needed to get my mother off my back, and sin seemed to do the trick.
Two years later, I have to go back home to London for a traditional wedding ceremony for the marriage I faked.
You know, to the wife I never married.
No need to tell the girl I hire to be my fake wife about all the hoopla.
She doesn’t need to know until D-Day.
All my sexy companion has to do is play bride and “marry” me again, you know, for the first time. Then she gets a huge payday.
And I can get back to building my empire in New York.
Lucky, lucky girl.
Something tells me that she’s going to want more than just my money though.
She’s faking it for wealth, but I’m soon playing for keeps.